To have the optimal experience while using this site, you will need to update your browser. You may want to try one of the following alternatives:

Who does the cable company call when they have an emergency, SERVPRO! 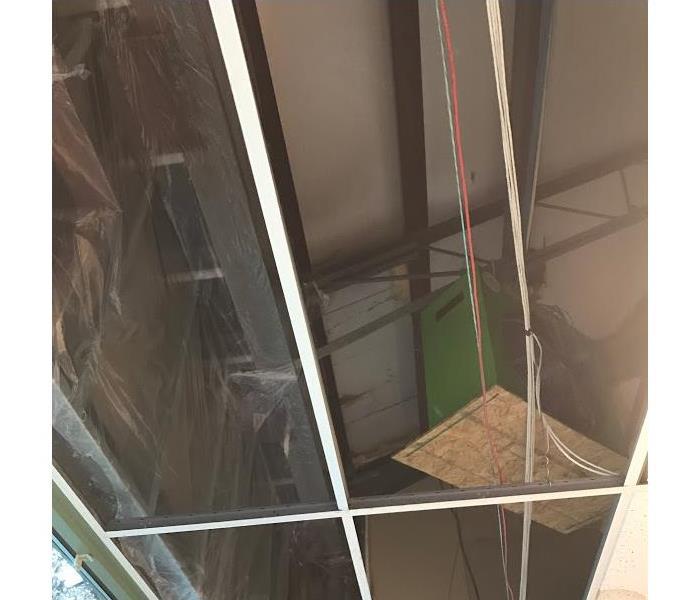 When your cable goes out, you call the cable company; when they have an emergency, they call SERVPRO.  That’s what happened this past holiday weekend when they had a fire in one of their properties.

The fire was from an electrical wire in the rain gutter that melts ice when temperatures drop below freezing.  The fire burned the gutter area and smoke penetrated the building leaving a foul odor and a mess from the water that was used to put out the fire.  The SERVPRO team arrived as the fire trucks left and began the restoration process immediately.  All debris that had fallen was cleaned up, the area was secured with containment, and deodorization equipment was set-up.  The building owner had a roofing company working on the exterior removing some burned materials and tarping the roof.  The following day the SERVPRO team returned to clean the offices in detail and the additional debris that had fallen during the temporary roof repair.  That’s when the real problem was identified.

There was an eave area in the ceiling cavity that was inaccessible from the interior.  This area contained burned/charred wood and metal studs.  This eave area was behind one steel support beam and had to be seen by using a cell phone camera as a periscope while standing on a ladder on top of scaffolding.  Once identified, the appropriate parties were notified and a plan was made to remove the materials the only possible way, from the outside.  Ladders and scaffolding were set up and the burned materials were surgically removed.  After materials were removed the area was secured with a new tarp, insulated, and a plastic barrier was installed.  A customer platform for our hydroxyl generator was made to suspend the machine from the ceiling beams.  After the deodorization equipment was run for a few more days, the odor was fully removed!  Repairs are in progress now.